Since 1990 the tourist office has been located in ‘t Blaeuwe Huus in Ouddorp. There guests found a counter with helpful staff, a store and a small exhibition room. The Tourist Office Goeree-Overflakkee wanted to renew this after 25 years and asked our help to come to an Inspiration Point, where guests can explore what is going on at Goeree-Overflakkee in a contemporary and interactive way.

We first made an inventory of wishes, required functionalities and the identity of Goeree-Overflakkee. In consultation with the tourism board and stakeholders, we listed the stories that needed to be told. We then made a briefing for a designer and supervised the design process. This has led to a design, with which we have drawn up a project plan and financing plan. We helped in obtaining the financing and the decision-making process. After the financial means were ready, we supervised the graphic design and the realization of the inspiration point.

The result is a contemporary and modern Goeree-Overflakkee Tourist Office Inspiration Point that, according to NRIT (Dutch trade magazine for tourism), will “inspire many tourists as well as guests”. This sets a new tone in physical hospitality in the Netherlands.

Inspiration about Goeree-Overflakkee
The experience starts with an interactive table, on which a model of the island with landmarks is shown. The table is brought to life through projection. Surfers sail over the table, tulips bloom and cyclists move over it. Various themes can be selected on a large touchscreen. The projection of the table adapts to the theme. For example, if the guest opts for “Visiting a nature reserve”, different nature reserves can be clicked. The location appears on the table, information about the area on the touchscreen and photos of the nature reserve on a large wall behind the table. 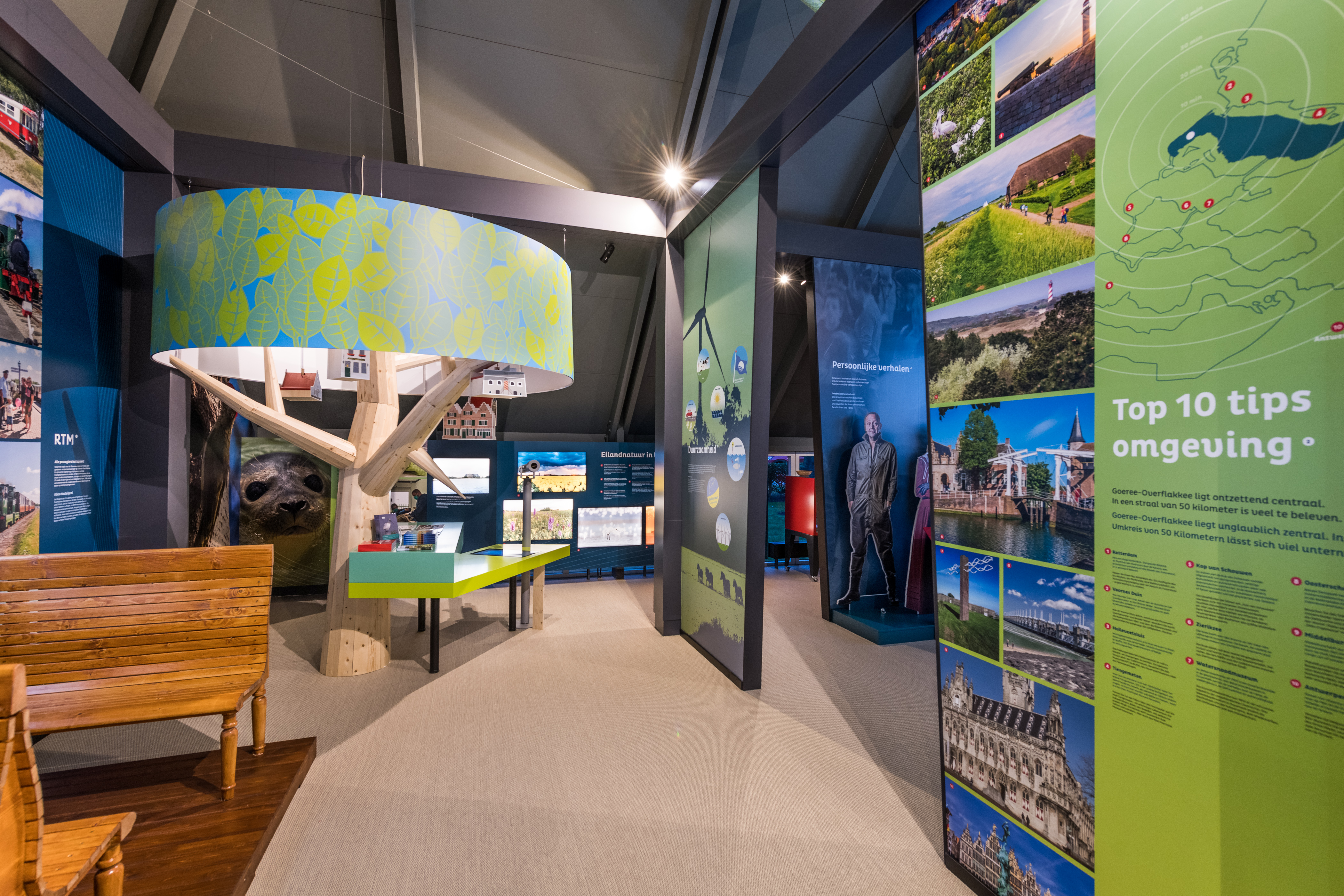 1025/5000
From tram ride to pop-up museum
But there is more to experience. For example, guests can watch a video about the island in the counterfeit interior of an old tram, where movement effects in the benches feels like you are actually taking a tram ride. Further are some famous residents of Goeree-Overflakkee, such as Dave von Raven (singer) or Richard Groenendijk (comedian). They talk about their bond with the island and their favorite places. There is also a pop-up museum with mini exhibitions from museums. And special nature photos from well-known photographers at the island are shown on specially lit panels.Water as a theme
The theme of water is important for Goeree-Overflakkee. Water sports images are projected on surf sails and current weather information, such as wind speed and wave height. You can choose a fish menu on a culinary table, after which a culinary fish dish appears on a plate. Followed by an explanation of the relevant fish species.

The average duration of visitors to the Tourist Office has increased sharply and visitors’ reactions have been very positive.

Do you also want to make the transformation
from information to inspiration?
Then contact us!